Skip to content
Posted inSeated Liberty Half Dollar
Posted by By admin September 5, 2010 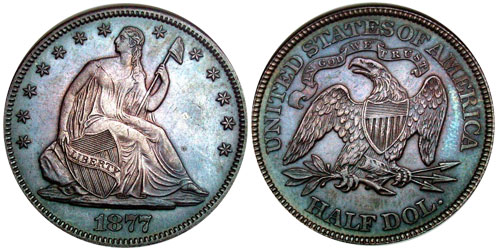 Proof Seated Liberty Half Dollars (Buy on eBay) were struck throughout the course of the series. During the earlier years, production was extremely limited and most dates are only represented by a handful of survivors. Starting in 1858, proof production took place on a regular basis with higher mintages, ranging from a low of about 300 pieces to a high of 1,355 pieces. The Philadelphia Mint proof half dollars from 1858 to 1891 are all relatively available, although careful selection is often necessary to select premium pieces with excellent eye-appeal.

A scattered number of branch mint proofs also exist. These are extremely rare issues, typically created under mysterious circumstances or for reasons unknown. Among these issues is the 1855-S Proof Half Dollar, of which three examples are believed to exist. One example is held in the Smithsonian Collection, another has not been seen in decades, and the third most recently sold at auction for $1158,625 in 2014.