Skip to content
Posted inSeated Liberty Half Dollar
Posted by By admin September 2, 2010 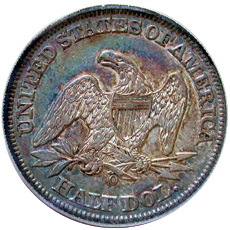 The Liberty Seated Half Dollars were struck in a composition of 90% silver and 10% copper throughout the entire series. The weight of the coins would change on two occasions. From the start of the series in 1839 until 1852, the coins carried a weight of 13.36 grams. From 1853 to 1873, the weight was reduced to 12.44 grams. During 1873, the weight would be increased slightly to 12.50 grams and remain the standard through the conclusion of the series in 1891. Across all years, the coins have a diameter of 30.6 mm and a reeded edge.

Production for the series took place at Philadelphia, New Orleans, San Francisco, and Carson City. As usual, those struck at Philadelphia do not carry a mint mark, while the “O”, “S”, and “CC” mint marks for the other issues are located beneath the eagle on the reverse.

Generally speaking, the Philadelphia and San Francisco issues have better visual appearance than the Carson City and New Orleans issues. Some issues from the New Orleans Mint are known for being weakly struck, while others have the same striking quality as coins from other branch Mints. Another problem with many issues is the large circulation and subsequent mishandling from early collectors, which makes high-quality, original coins with good eye-appeal in the distinct minority, regardless of issue or Mint.